When David and I went to the new Emeril’s restaurant (Emeril’s Coastal Italian), he had the Brussels Sprouts.  They had this vinaigrette on them that was wonderful.

We love roasted Brussels Sprouts, and thought the addition of a vinaigrette would be good as well.  So I searched, and found Emeril’s site full of his recipes.  His recipe called for the following:

In a large saute pan, render the bacon until crispy. Add the shallot and garlic and cook until softened and translucent. Remove from the heat and whisk in the mustard, 3 tablespoons of the vinegar, and the brown sugar. While continuing to whisk, add the canola oil in a thin, steady stream. Season lightly with salt and remove all but 1/3 cup of the vinaigrette from the saute pan to reserve for later.

Emeril deep fries the sprouts.  Again, we roasted ours, but when they were done tossed them with the dressing. 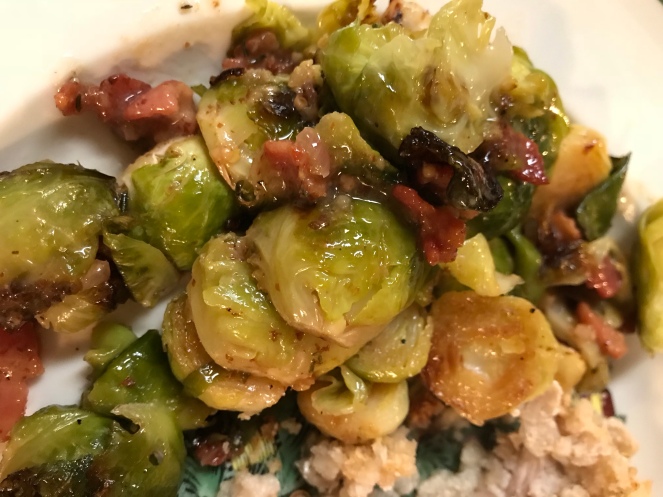 It was bright, and tangy.  It added a depth to the sprouts that was needed.  We all loved it.

Daughter of the King, wife to hubby David, Mom to Carmen and Stephen. Lover of the Razorbacks, Gastric Sleeve 5/16/16, Lupus Warrior. View all posts by jachancellor